If you have a chance to visit Southeast Asia, you can not miss out Mekong River which is considered as the paradise of the land as well as the life source of local people in two sides of the river. Therefore, the post will introduce things to know about the Mekong River to all readers to know more about the history and related things about this amazing river.

The Mekong River is one of the largest rivers in the world, originating from Tibet, flowing through China, Laos, Myanmar, Thailand, and Cambodia into the South China Sea in Vietnam. It is ranked in the 12th position (7th in Asia), also the 10th largest in the world (the annual flow is about 475 million m³). The average flow is 13,200 m³ / s, in the flood season can be up to 30,000 m³/s. Its catchment area is approximately 795,000 km² (according to MRC data) or more than 810,000 km² (according to Encyclopaedia Britannica 2004).

This river originates from the highlands of Qinghai Province, crosses Tibet through Yunnan (China), through Myanmar, Thailand, Laos, and Cambodia before entering Vietnam. These countries (except China) are located in the MRC. Water traffic on the Mekong River is difficult due to seasonal variations in flow, fast runs, and high waterfalls. Therefore, compared to the tremendous potential of being properly exploited, only a small part of the river is currently used for irrigation and hydropower generation. 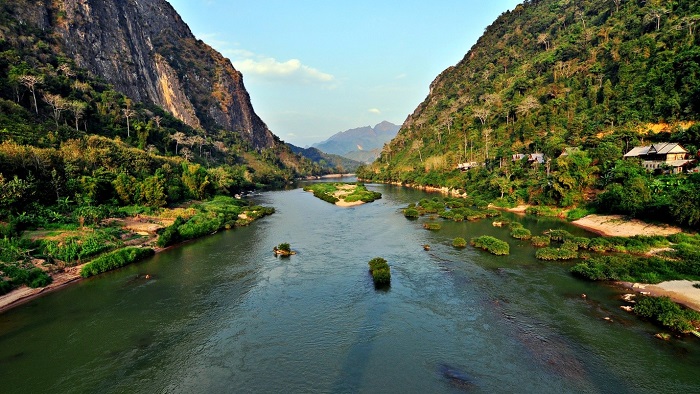 The upper part of the Mekong river in China

Mekong Delta is known as the land which has unique tourism potential and unlike any other region of Southeast Asia. When visiting there, tourists will have a chance to admire the typical ecological landscapes on the 2-day Mekong Delta tour. They are the delta and sea island, a charming and charming river area, fruit trees with four fruit trees, fresh environment, rich natural resources combined with the essence culture, history of the community brothers: Kinh, Hoa, Khmer, Cham, Laos, Thai, etc with many traditional folk festivals carrying unique cultural identities.

Mekong river plays an important role in forming the human civilizations in history, There are the glorious civilizations in the area that created strong empires such as the Khmer Empire. And the relics of this empire still scatters in the territory of Cambodia and Thailand nowadays.

Mekong river is also considered the mother river and the sacred river of local people. They considered this river is the begin of life and when the people pass away, they desire to turn back to where they begin. So, there are so many festivals and events operating in the river annually. And the most famous festival is the water festival of Laos and Thai people in the new year.

Meanwhile, the Water and Moon Festival is held every year in Phnom Penh, hundreds of thousands of Cambodians flock to the street to participate in the festival. This important three-day cultural event marks the end of the rainy season and the remarkable reversal of the flow of the Tonle Sap lake During the festival days, you will admire the racing scenes among traditional Khmer boats.

Besides that, due to throwing many different types of terrains, this river also creates many breathtaking and majestic landscapes in the upper tributions in China and Laos as well as the peaceful and idyllic views of plain areas in Cambodia and southern Vietnam. 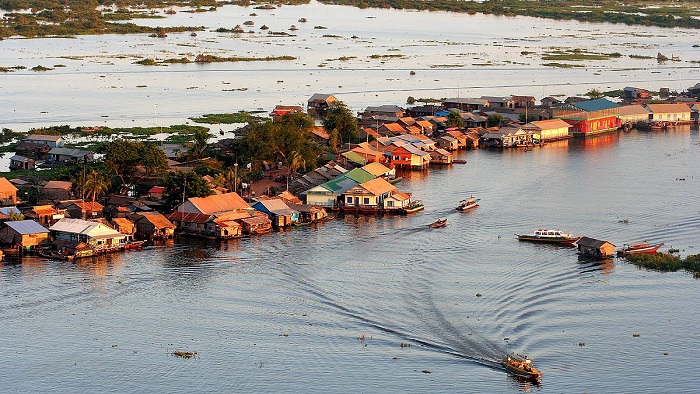 After running through China, Laos, Thailand, Cambodia, this river finally flows into Vietnam in the border of Vietnam-Cambodia. Before entering Vietnam, this river is separated into two branches: the Tien river and the Hau river that created the biggest and most flourished river delta in Vietnam. This delta is considered the rice bowl and the biggest orchids of Vietnam.

Furthermore, the Mekong River is fertile alluvial to the Mekong Delta with two main tributaries including the Tien and Hau rivers, the canal system of interlacing with mountainous and marine islands, forming a diverse ecological area. The scenery, majestic, containing many interesting things invite visitors near and far.

Therefore, when visiting the place, tourists can enjoy Ben Tre coconut forest with a lot of coconut products and Tam Nong bird sanctuary, Sa Dec's famous flower village (Dong Thap); floating market in Can Tho - Tien Giang with thousands of fruits; Ha Tien island and Phu Quoc island (Kien Giang province) with hundreds of undulating islands in the middle of the sea. The Seven Mountain (An Giang); Nam Can River, Ca Mau Cape has come into history as a legend. 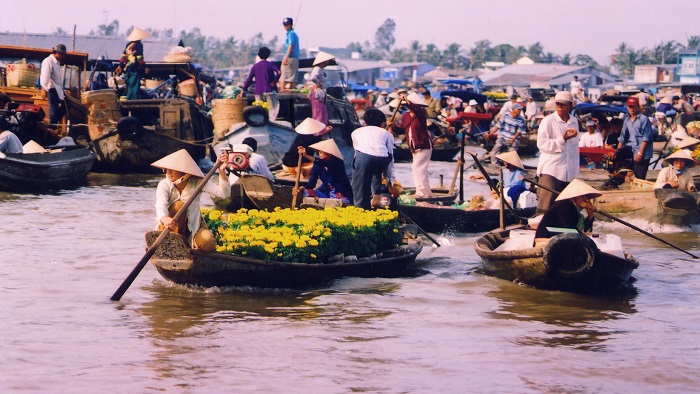 Mekong Delta tourism potential is very large and diversified development possibilities. The Mekong Delta is exploring and planning tourism development. In order to step by step invest in the system of material facilities for the tourism industry and create tourist products typical of the delta and island as well as improve the quality of services, regional links, tours to develop tourism with potential.